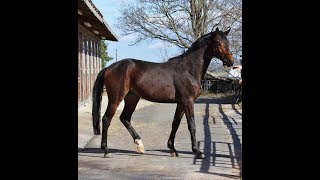 One for the great dressage arena !!! Young stallion 2016 by Grey Flanell/Jazzman/Don Primero appr. 171 cm in the moment with with very spectacular and big movement and despite his size and young age very much elegance. Video https://www.youtube.com/watch?v=9Qt_kIbLsEo The stallion is very nice and lovely in all things. No stallion manner and absolut clear in the head. A great juwel for the big dressage arena !! In the moment still unbroken and standing in open stable in gelding group. Video was the first time free running in a halle. The damline is the out of very success hannoveraner breeding farm :Hänigsen, which among other things the stallions of Cervantes, Frappant, Weltbekannt emerge (United States) and Livijno (R. Zeilinger) comes out. Sister is state premium/elitemare and was standing in the "Brilliantring" in Rasteede under the best mares in Oldenburg and was in the finale of the german horse championship. Later winner in young horse S-Dressage. In 2018 she has won by the young rider EM in France the bronze medal with the danish team. Full brother to the dam is approved premium stallion and fullsister finalist german championships and later trained up to Grand Prix. Other sister state premium mare and mother state premium/elite, winner mare performance test, stallionsmother and one of the breeding index highest broodmares by Württemberg His father Grey Flanell passed his 30 day test with strong emphasis on dressage. He was winner in A dressage horse classes, was high placed in the L level and was in 2014 the best 4 years old stallion at the Pavo Cup. 2015 qualificated for the German horse championship and now successful up to M dressage level. HIs offsprings are dominated numerous foal shows and auctions. Sold for highest price there. 4 sons have been licensed now... His grandsire, Jazzman, further enhances this remarkable dressage pedigree. This impressive, dark bay stallion, who was a successful dressage champion up to S-level, is in the top 25 % of the German breeding list and one of the breeding index highest sons of the Dutch top sire, Jazz. Don Primero by Grand Prix successfully and with World Cup I is the father of the great Weltmeyer on the end of the pedigree. High quality young stallion for dressage Has in the moment only one one testicle outside. Price over 45.000 Euro Located in Germany www.dressagehorse-quadriga.com (user data)

So far, there are no tournament results from Grey Jazz are stored.

register for free
cancel
Your request has been forwarded to the provider. We wish you good luck with your purchase.
close
You have already made 5 requests today. Get the pro membership and you will be able to send endless requests. Become a pro member now
close
In your message contains a link. This is not allowed. Please try again without a link.
close
Your email address is stored in a blacklist. Please contact the rimondo support to know the reason.
close