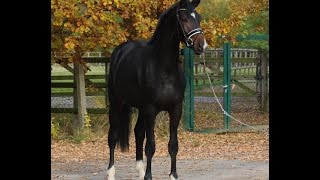 show all 2 movies of Fürsten King

So far, there are no tournament results from Fürsten King are stored.
Young gelding by Fürstenball with FEI potenzial for big rider Young gelding 2014 by Fürstenball/Jazzman/Don Primero Ppr. 174 cm with with very spectacular and big movement and despite her size very much elegance. The gelding is very nice and lovely in all things. Through his size he was first broken with 4 years and than he has had break because we have him castrated. Now first a short time under the rider again but makes a very good job and needs only a little more time to find the right balance. Very easy to ride and lovely in all points. Complet clear in the head so sure one for the young rider tour . His father Fürstenball began at a tender age to set milestones. He won his licensing and stallion performance test, was regional and national champion of Germany, sire of champoion stallions, winner of S level dressage classes, 2013 VTV stallion and number 1 of teh FN breeding valuation throughtout German in 2015 ... His grandsire, Jazzman, further enhances this remarkable dressage pedigree. This impressive, dark bay stallion, who was a successful dressage champion up to S-level, is in the top 25 % of the German breeding list and was a lot of years one of the breeding index highest sons of the Dutch top sire, Jazz.Don Primero by Grand Prix successfully and with World Cup I is the father of the great Weltmeyer on the end of the pedigree. The damline is the out of very success hannoveraner breeding farm :Hänigsen, which among other things the stallions of Cervantes, Frappant, Weltbekannt emerge (United States) and Livijno (R. Zeilinger) comes out. Full sister is state premium/elitemare and was standing in the "Brilliantring" in Rasteede under the best mares in Oldenburg and was in the finale of the german horse championship. Later successful in the young rider tour in Denmark. Has won bronze medal by the young rider EM in France 2018. Fullbrother to the dam is approved premium Stallion and , fullsister finalist german championships, sister state premium /elite mare and mother state premium/elite, winner mare performance test, stallionsmother and one of the breeding index highest broodmares by Württemberg. The gelding has had with 1,5 years a chip operation. Other x-rays were all complet clean to this time. Shipping we can organice world wide. Price over 50.000 Euro Located in Germany by www.dressagehorse-quadriga.com

You want to know more about Fürsten King?
Then register to rimondo for free now!
why rimondo